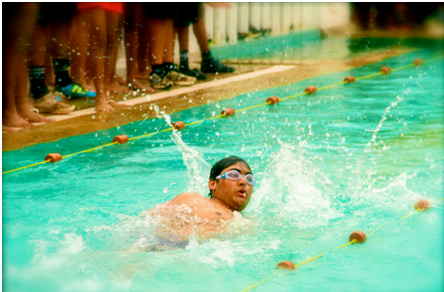 An hour long swim routine for me is anything but tiring or exhausting it is in fact refreshing. I have been swimming for past twelve years.  I am from Sarala Birla Academy, Bangalore an all-boys residential school located in Bannerghata region of Bangalore. Under the able guidance of my coach Mr. Shashi, I have been able to win many laurels and merits in various inter-school and state level swimming championships conducted throughout Bangalore. I also represented a famous swimming club of Kolkata, the Calcutta Swimming Club participating in the intra-club swimming tournament. I have successfully participated in the swim-a-mile contest hosted by Calcutta Swimming Club on the occasion of Independence Day.  I have won the silver and the bronze medals at the Karnataka ICSE Schools Association (KISA) State level swimming competition, which was hosted by The Ryan International School in 2012 and Sports Mentor in 2013. After having successfully getting the bronze and silver stage, I am currently pursuing the Gold Award for International Award for Young People.
Posted by The International Award for Young People at 7/29/2014 10:05:00 am