The Online Learning Hub is now ready for launch to Award Leaders from India. An important part of the Foundation's digital strategy is to provide a virtual space for adults involved in the Award to learn and share good practice. In the process to achieve this, the International Award Association has launched 'the Learning Hub' and is now open for the Indian Award Leaders. The Learning hub is designed to
This 'social media' environment allows us to learn from one another; it allows the Foundation to share materials and resources with specific groups; and allows us all to engage each other in developing our skills and sharing experiences for the improvement of the people who facilitate, manage and deliver the Award across the globe. It is, essentially, Facebook for adults involved in the Award. But the 'Learning Hub' is more than a social environment. You'll also be able to access formal online courses via the 'Learning Hub' link on the toolbar.
The National Award Authority welcomes all certified Award Leaders to join the Online Learning hub. We think the Learning Hub will create a whole new set of ways for us all to develop even more people to provide the best possible access to non-formal education for young people through the Award. With your help, this system will become the core learning and support vehicle for a new wave of global expansion for the Award.
Please write to programme@dofe.in to get the access to the Learning Hub.
Posted by The International Award for Young People at 11/25/2015 06:16:00 pm No comments:

A Memory of a Lifetime

Anushka Ghosh, Bronze level aspirant from Delhi Public School, Gurgaon took part in her first Adventurous Journey during her Bronze Level Award.  Here she is sharing her experience with us.The excitement began a week before the fourth of November as the bags began coming out of the closets. The trip kick-started as all the Award aspirants who were thrilled to see the teachers accompanying them left for Rishikesh on fourth night. After an overnight bus-ride, enthusiastic singing and dancing, the participants finally reached the destination, Beas Ghat in Rishikesh. We were elated to see the campsite on the banks of the river Ganges. The tents were beautiful and the view of the river and the serene mountains was splendid. During the days spent there, activities such as flying fox, trekking, beach volleyball, river rafting and body-surfing were introduced to the participants. Rafting emerged as the most thrilling activity for the participants, especially as it was a new activity to the majority. Apart from the rapids, we were allowed to swim freely in the chilling Ganges waters, which took the spirit of adventure to a whole new level. All the difficulties and fears faced by us were taken care of by the instructors and our teachers too ensured that we were well taken care of. The trek arranged for us gave us a new perspective and a deep bonding with nature. The view of the turquoise waters blending into the orange of the skies due to the setting sun left us in complete awe.  The changing colours of nature, the tinge of purple in the rocks and the rustle of the leaves narrated a different tale to each one. Singing, dancing and enjoying meals around the bonfire, and watching the beautiful starry skies was absolutely euphoric. Apart from this beautiful experience and the joy and knowledge of the unknown, Rishikesh gave us a memory that will always be an intrinsic part of our lives.  Click for the pictures
Posted by The International Award for Young People at 11/25/2015 06:13:00 pm No comments:

Residential Project at a Spiritual Retreat 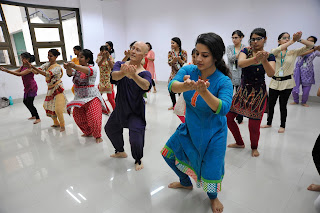 The 3rd International Convention of SPIC MACAY was held from 31 May to 6 June at IIT-Mumbai. SPIC MACAY (Society for Promotion of Indian Classical Music and Culture Amongst Youth) is a voluntary movement that organizes events (over 5000 annually) of classical music and dance, folk arts, crafts etc. in educational institutions through the world. The annual conventions of SPIC MACAY, with more than 300 chapters in India and abroad and thousands of volunteers working selflessly, is a Mahakumbh or a spiritual retreat. The annual convention has acquired international status from the past three years, when delegates from other countries also joined hands.

The International convention focusses on providing a unique atmosphere to delegates with an emphasis on the Guru-Shishya model. The convention aims to provide a holistic experience in line with classical Indian tradition and participants follows certain rules and regulations like consumption of holistic food, not using mobile/camera and early morning wakeup etc. The convention aims to bring the lesser known and often underappreciated art forms, and the associated artists back into the spotlight. Arts forms like Paper Mache, Puppetry, Kudiyattam and more are probably not as famous as others but they are without a doubt equally significant in the amount of skill and hard work that goes into them. The convention serves as a great stage for these artists to earn the respect and appreciation they deserve while attracting people towards these lost art forms.

The unique experience of the week-long "Aashram-Vaas" for nearly 1,800 participants from home and abroad was unforgettable, where the normal day started at 4 am with Naad-Yoga, the practice of music; Hatha Yoga, the Yogic exercises; and Dhyaan Yoga, or practising meditation; followed by "Shram-Daan" or cleaning up the surroundings. After it the most unique feature of the convention: the 3 hour long intensive workshops every day by renowned Gurus of classical music and dance, folk theatre, painting, handicrafts and much more. Based on what we learnt during this period we got a chance to perform in front of everyone on the last day.

Another unique feature of this convention was the overnight music concert which started on the night of June 5, 2015 from 8 pm and go till 6 am in the morning of June 6, 2015. Renowned artistes like Balamurali Krishna, Aswani Bhide Deshpande, Pandit Vishwa Mohan Bhatt, Wasifuddin Dagar performed during the overnight concert. On the last day, the participants were taken on tours to different heritage sites in the city like the Kanheri Caves, the Sanjay Gandhi National Park and many more.

All in all, the week-long convention facilitated hundreds of participants not only the awareness of our classical art and culture but also its ethos, the deeper and subtler meaning and values, inspiring them to become better human beings. Click her for pictures

What I learned from doing the Award

About the International Award 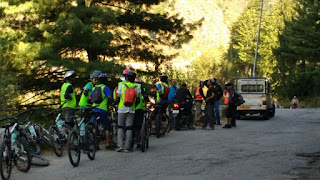 The IAYP Silver & Bronze levels Adventurous Journey was held for Symbiosis International School, Pune from 25th to 30th October, 2015. Forty-five Silver level and two Bronze level participants were taken to Manali. They took a flight from Pune to Delhi followed by a 14-hour bus journey to Manali. They stayed at Prini base camp located 3kms from Manali.

The participants reached Manali on 26th morning. The 3rd practice trek took place on the first day from the base camp to Jamdigni Rishi temple. The overall trek was 6kms long and all the participants were able to complete the trek successfully. It was a fitness and endurance test and the participants showed the same perseverance like the 2 earlier practice treks. The same evening, they participated in a number of team activities like stretcher - making things out of limited resources available in the wild - and pitching tents. They learnt valuable and crucial life skills. It also promoted team spirit, co-operation and using presence of mind and analytical skills among the students.

On the morning of 27th October, the participants were divided into two groups. Half of them went for a cycling journey and the other half went for rafting. The cycling team travelled to Naggar castle located 18 kms from the campsite. The total journey was 36 kms to and fro. The cycling trip pushed the participants to their limits. It was a test of extreme perseverance and grit. Most of the participants had never covered such a massive distance on a cycle, which made it difficult for them to keep up but they worked to the best of their abilities and completed the journey. The road journey had many uphill and downhills at various points and the castle was located on a hilltop. The trip was extremely strenuous and challenging, however, the participants did not give up. This journey boosted the confidence of the participants and showed them the importance of stamina and will.

While half the group participated in the cycling trip, the others went white water rafting on the river Beas. The starting point of this was Pirdi. The journey was 14kms long and ended at Sharavai. The challenging part of this journey was the extreme temperatures of the water, which was very difficult to bear. The participants coped well with this physical as well as mental challenge. Rafting also promoted team work and co-ordination. Overall, it was an extremely enjoyable experience.

The same activities continued on 28th October. The group that did cycling switched to rafting and vice- versa.

A cultural programme was organised for the participants in the evening where a local dance troupe performed 'Kulvi Pahadi Naati'- their folk dance. This helped the participants understand their culture.

29th October was the last day in Manali. The participants embarked on a trek in the morning to Arjuna gufa (cave).  It was a to and fro journey of 10kms. They travelled to a cave where Arjuna, an important mythological character in the Mahabharata, had meditated in peace. This was an insightful experience and the participants got to admire and appreciate the elaborate history and beliefs of the religion and country. The trek was quite tiring physically but the participants were motivated as it was the last day. They completed it in time. The participants covered a humongous 60 Kms trek in 3 days.

Finally the participants leisurely spent the evening at the local market before leaving for Pune. The Adventurous Journey was extremely memorable for all the participants. They learnt important life lessons that will stay with them for the rest of their lives. This exhausting yet enjoyable journey left an indelible impression on each one of them.  Click for pictures
Posted by The International Award for Young People at 11/04/2015 02:44:00 pm No comments: