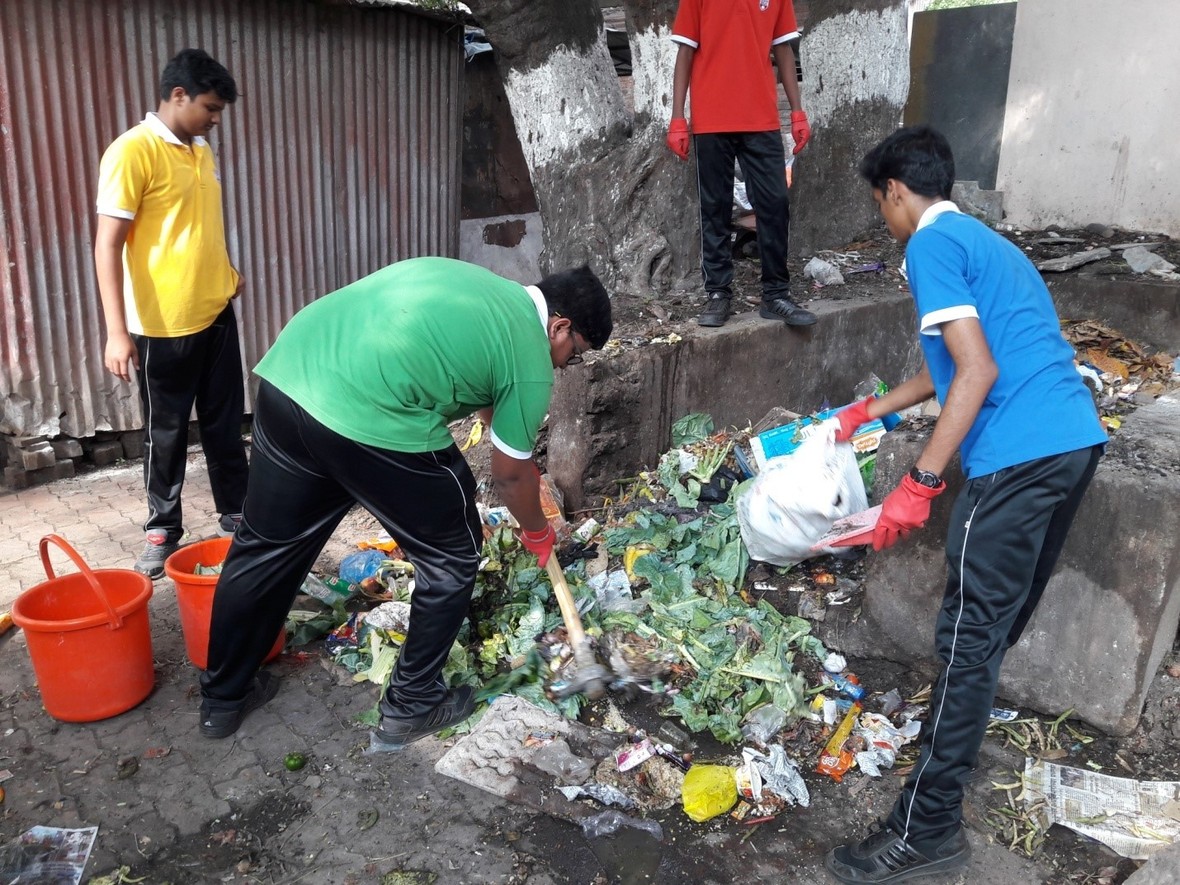 The Award participants of Sanjay Ghodawat International School, Atigre undertook the second phase of their cleanliness drive in the village of Hatkanangale (Maharashtra) in the Old Market Area on Saturday, September 9, 2017. All the 96 Bronze and 8 Silver participants were involved in this activity under the supervision of 15 mentors.

The purpose of the second phase of this cleanliness drive was to create more awareness among the villages regarding hygiene. The open drains which were cleaned during the last drive were not in a good condition, and the participants had a difficult task ahead of them as the drains were again filled with polythene bags and grass had sprouted around the drains. The Award participants convinced the villagers not to throw litter everywhere. They also discussed the negative impacts of poor hygiene on our health. The participants visited each home and shop of the area to spread awareness. It took nearly three hours to clean the drains. The work was appreciated by the villagers and the Sarpanch of the village. Click here for pictures 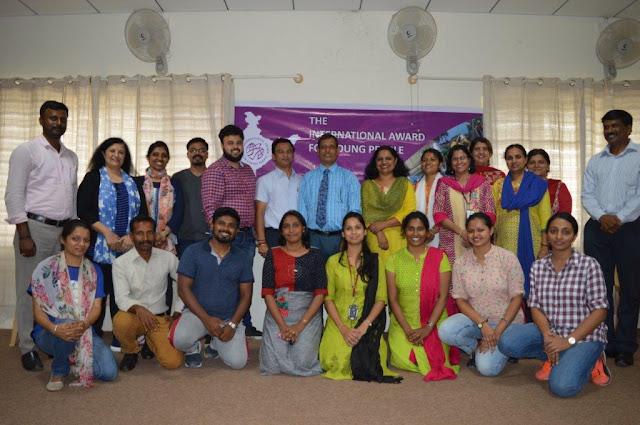 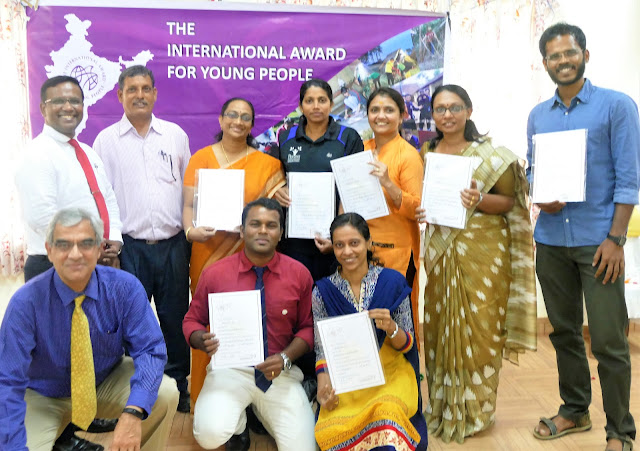 During the visit, the Programme Manager delivered an Award Orientation to Govt Higher Secondary School, Pennagar, Vellore and Vedavalli Vidyalaya Senior. Secondary School, Walajapet, Vellore. Bivujit Mukhoty was assisted by Sasikiran (Programme Officer) during his visit.
Posted by The International Award for Young People at 9/20/2017 06:11:00 pm No comments:

Save Paper, Save Plants Campaign 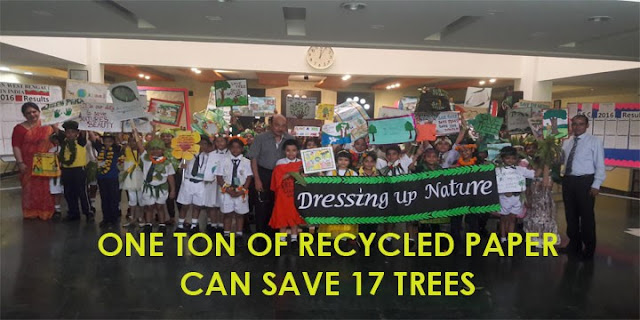 The Award participants of DPS Megacity, Kolkata along with students of Eco Club took part in a campaign named “Save Paper Save Plants”. These are the initiatives taken by the participants to create a green environment:
In conclusion, it can be said that DPS Megacity has truly followed the mantra of REUSE AND RECYCLE for the conservation of plants and contributed immensely to our planet Earth in reducing global warming. 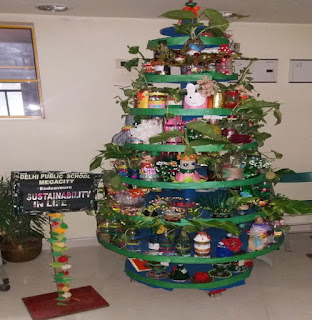 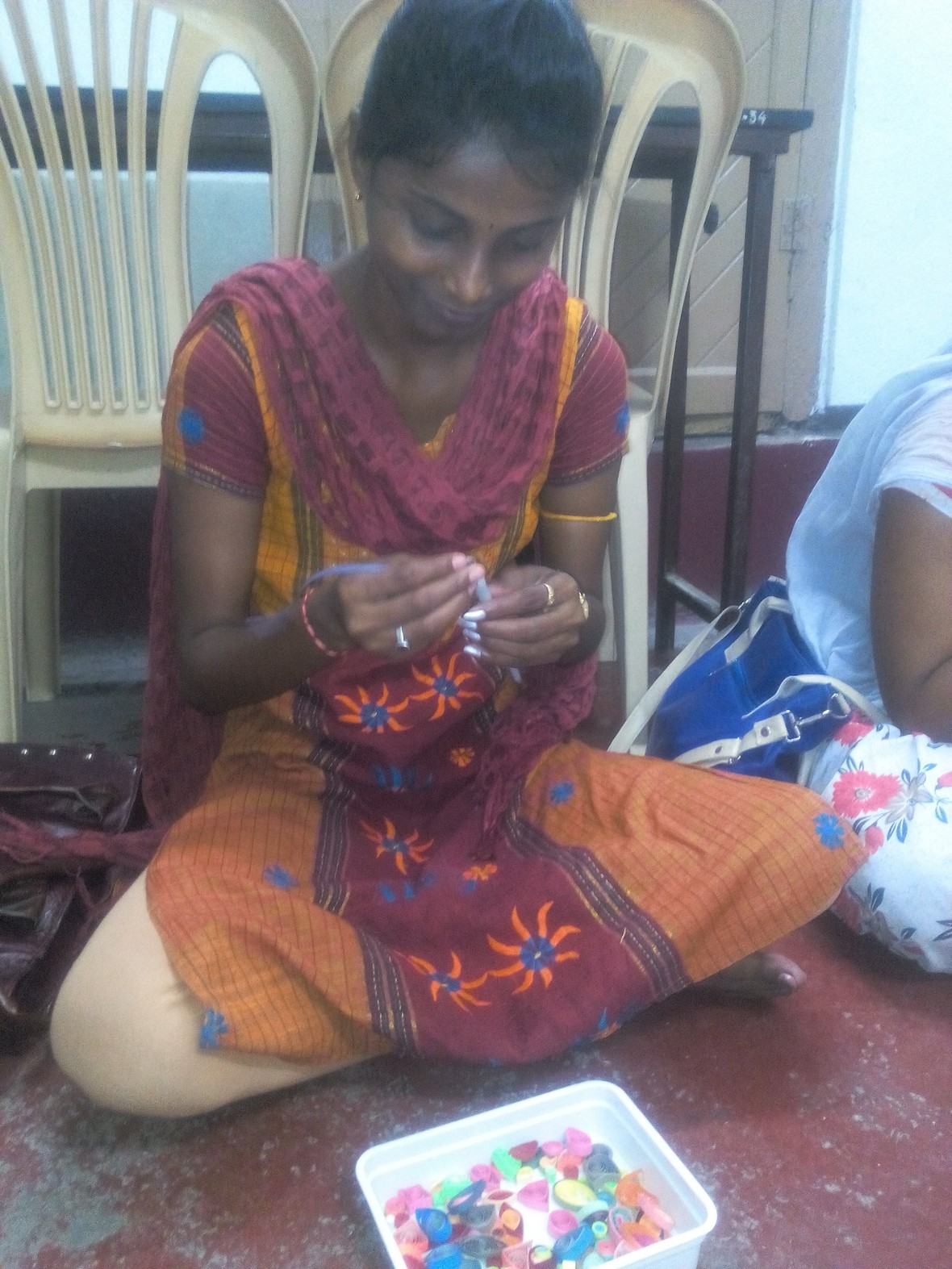 My name is Priyanka Sarkar. I live in Chandannagar, Hooghly. My father serves tea at the station. With his meagre earning, we found it difficult to meet our daily needs. After my Higher Secondary Examination, I came to take admission at Sri Sarada Math Rasik Bhita with my aunt, for a basic computer course and Communicative English course. During this period of time, I came to know about the “International Award for Young People, India.” or the IAYP programme from Adrija Di in one of her classes. Then I enrolled myself into this programme and completed the Bronze and Silver awards. Now I am working for my Gold award. I could not complete my graduation due to my family's poor economic condition. 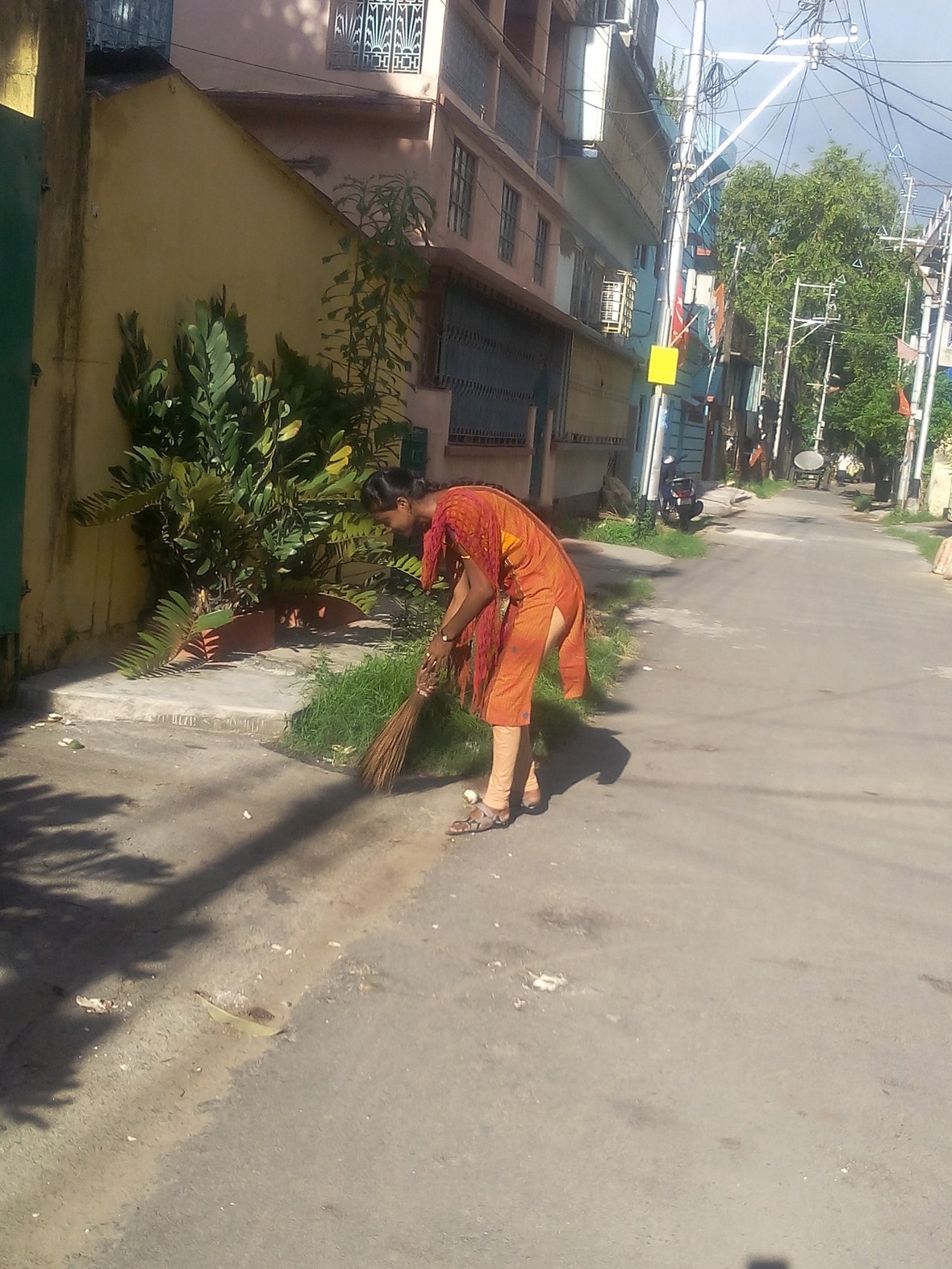 This spirit of IAYP took me to the Jadavpur University. There I went to pursue a diploma course in social work. I faced an interview for the admission. During the interview the interviewer asked me different questions about IAYP like, the reason for being a part of the programme, the functions of the programme, what I have gained from this programme and the changes which took place in my life while doing this programme, the reason of the skill section of IAYP etc. They also asked about Sri Sarada Math and Rasik Bhita; how Matajis help us, how do we perform the activities in the Math, what type of social work do they do etc. I also mentioned the regular activities of “Nibedita Bahini”, formed by a group of girls of Rasik Bhita, how it works, what type of work they do and so on. After this interview, I got the opportunity to begin the course there and after six months of I completed. Then I wanted to pursue MSW (Master in Social Work) but without a B.A degree it was not possible to do the course. Then I went to Tata Institute of Social Sciences (TISS) for admission. There I gave an entrance examination and faced another interview session. There they also asked about my past, about Sri Sarada math, IAYP, diploma course in Jadavpur, Nibedita Bahini etc. Then I finally got the opportunity to study at TISS. They also granted to pay half of my course fee because of my poor economic background. Now I am studying “Child Protection” for three years. All these steps of success were not possible if I had not been a student of Rasik Bhita and an awardee of IAYP. I am truly grateful towards them. 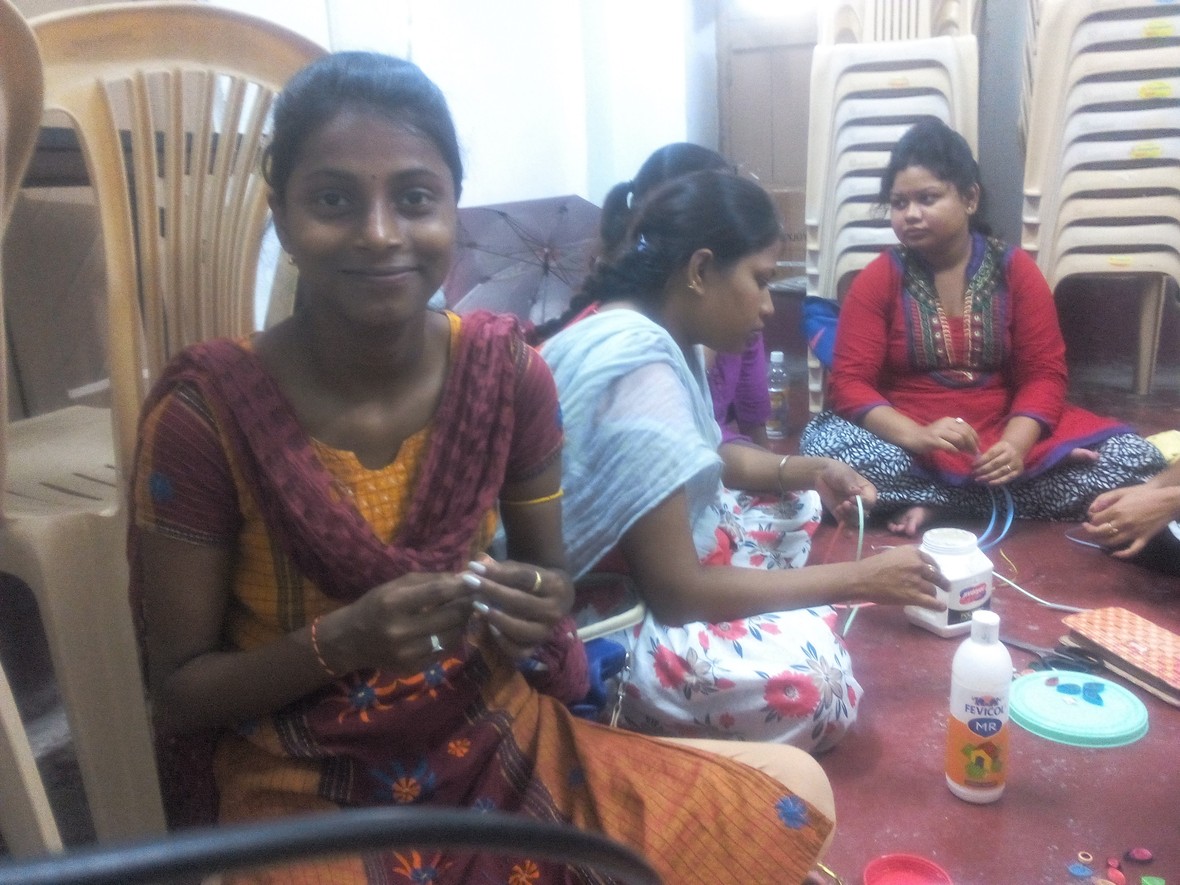