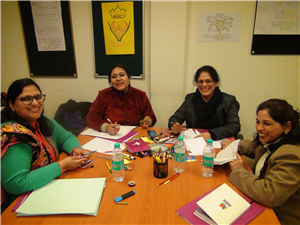 The National Award Authority organized an Award Leader Training Workshop at the Award Training Centre, New Delhi on January 22-23, 2015. The participants included delegates from Sarala Birla Gyan Jyoti, Guwahati, Assam; Kothari International School, Noida, Uttar Pradesh; Him Academy Public School, Hiranagar, Himachal Pradesh; Purukul Youth Development Society, Dehra Dun, Uttarakhand and DLF Public School, Ghaziabad, Uttar Pradesh. Kapil Bhalla (National Director) started the workshop with an ice-breaking session and then introduced the Award to the participants. Over a span of two days the participants were given in-depth knowledge regarding the four domains of the programme i.e. Skills, Service, Physical Recreation and Adventurous Journey and also the Residential Project for the Gold Award Programme. The participants were also introduced to the technical aspect of the programme, which included Risk Management and Branding. Bivujit Mukhoty (Programme Manager), Priyank Kumar Gupta (Head IT and ORB), Ranjana Rai (Member NTP) and Pallavi Gill (Member NTP) lead the workshop for two days.  The trainers shared their own experience as trainers and Award Leaders and had an engaging discussion with the participants. Click for pictures
Posted by The International Award for Young People at 1/29/2016 01:04:00 pm No comments: 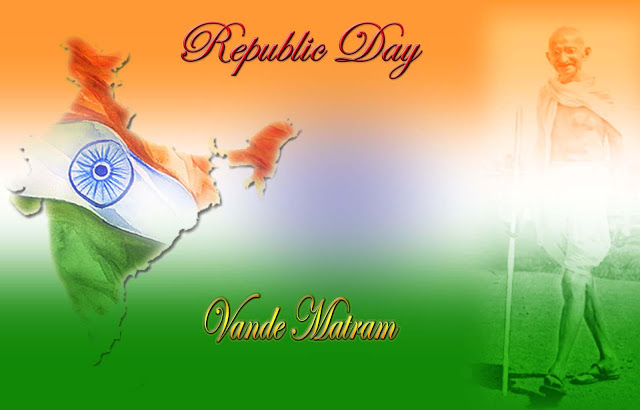 My first 'Trek' of life with IAYP 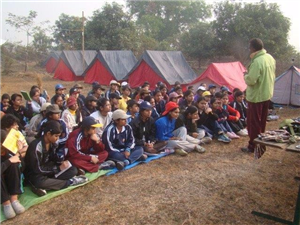 The National Award Authority organised an Adventurous Journey camp for the Bronze and Silver Level under Gender Diversity & Empowerment Project at Bisindha, West Bengal from 6th - 10 January 2016, with the support of experienced instructors from Institute of Climbers and Nature Lovers, Kolkata. Nidhi Raj Chatterjee, Bronze awardee -- one of the sixty-four participants -- describes her first ever exposure to adventure.

My name is Nidhi Raj Chatterjee and I'm a Bronze awardee of International Award for Young People. I recently had my first experience of Trekking with the skilled instructors. I'd like to share my experience and everything that this trek has taught me.

Second, it helped us a lot to learn how to 'Socialize' with people. There were 64 of us, who came for this journey to experience adventure and learn survival on Hills and Mountains. When I started for the trek, I knew only three other participants who were my friends, but when I returned I had an endless list of friends on my card. Initially I was worried about what people around me would be like, but as soon as I reached and 'socialized', all my fears disappeared. It was because we all lived in the same environment, wore the same type of clothes, ate the same food, and shared the same shelters. We woke up together, ate together, learned together and enjoyed together. This trip has helped me enlarge my circle of friends and enhanced my ability to be friends with people irrespective of age and origins.

Now I would like to share the most remarkable part of this entire journey, 'The Lifetime Experiences' and 'Learnings'. We were introduced to the 'life saving equipments' of trekking and mountain/hills climbing. We were taught how to use those equipments to survive on the hills. We were introduced to the different kind of 'knots' that are used for various purposes. We experienced great adventures like crossing on and from 'Travellion Traverse', 'Joomering', 'Single Rope Bridge' and 'Burma Bridge'. And then we experienced a trek of around 16-17 kilometers in a day.

This entire camp has brought many changes in all of us. From waking up before sunrise and then going for workouts in the morning, then having meals on time and with discipline, socializing with people, living without any electronic gadget, and staying enthusiastic whole day. From this Adventurous Journey we have learned so many things which otherwise would not have been possible.

We are all extremely and whole heartedly thankful to our instructors for drawing out the best in us and making us aware of our hidden strength. Click for pictures...

Ninety-eight Award participants (32 Silver and 66 Bronze) from The Sanskar Valley School, Bhopal completed their Adventurous Journey from 16th - 22nd October 2015 at Rishikesh Neelkanth area.  Let's hear from the participants after their journey.

Devak Namdhari, a Silver level participant says, "Spartans! What is your profession -- HA-OOH! HA-OOH! HA-OOH!" Teenagers shouting this at the top of their voices identified our group. Almost a hundred students participated in this adventure trip, and each one went home with more than a thousand memories. We laughed, we danced, we planned, we conquered our fears and we had fun. From bonfires in the night, to swimming in the bone-chilling waters of the Ganges, this was a true adventure trip. Kayaking, Natural rock-climbing, Rappelling, Paintball, White water rafting and Trekking -- we saw it all, and we did it all. Quite a lot of us faced our fears and we learnt how to overcome them. We learnt more than a dozen life-skills, without even realising it. Most of us who are busy with our urban lifestyles, often forget to appreciate nature but we never expected our technology-addicted selves to switch off our cell phones and admire the serenity of the water, the prosperity of the forests. This well-planned and action-packed trip to Rishikesh and Shivpuri shall always be in our hearts as a memory that we'll forever cherish.

Sakshi Pradyumn, another Silver level participant said - "What you see is what you believe. And what you experience is what you remember.' And this IAYP trip was in no contrast to this statement. It had all the elements of adventure one can think of from fun to fear. Not only did the scenic panorama of the Shivaliks thrill me, but also the alternate shallow rapids and calm waters of Ganga made me wonder. The trip taught me to adapt, to support, to take responsibilities, to adhere to rules, to take challenges, to respect Nature, and most of all to believe. Whenever the feeling, 'Oh my God! Could this adventure be done!' arose in my mind, I believed in my true self and here I am writing this review. Late night strides, curfew timings, enough dumb-charades at the campsite, were some of the experiences that were joyful. Long trekking, rock climbing, river landing, paintball fighting were the adventurous (rather really adventurous) things I did. The trip was well managed and the food was really good (as I am a foody). To sum up, this IAYP trip was the epitome of adventure and joy. Surely, I look forward to many more like it.
Posted by The International Award for Young People at 1/14/2016 11:28:00 am No comments:

On a Digha trek with the help of inner eye

Holding each other's hands they trekked for three days along the beach covering more than 60 km from Chandipur to Talsari and ultimately reached Digha. They could feel the wet sand under their feet, hear the waves breaking at a distance, feel the cool breeze gently sweeping their face, smell the sea and even touch the water bending down a little. Yet they couldn't see the sea. They are the students of the Ramakrishna Mission Blind Boys' Academy in Narendrapur (in picture).

"It was a wonderful learning experience and fun for us. We were out of the hostel's comfort and had to walk for nearly 20 km on an average every day for three days, cook our own food, sleep in tents and cross rivers sometimes on foot and sometimes on boats. But yet we never got tired and spent the evenings singing the latest Bollywood songs, danced and recited poems at the end of the day. The trip taught us many things," said Subhankar Bhunia, a student of class eight who is totally blind.

A team of 25 students, including 12 students who are blind in both eyes, from the academy -- all aged between 14 and 20 years -- went for a coastal trek on December 8. They were escorted by two teachers from the academy and around nine experienced trekkers from the Institute of Climbers and Nature Lovers.

"The team first reached Chandipur from where the trek started in the morning of December 8. On the first day they trekked for 17 km, crossed two rivers -- Buri Balam and Kasai -- and pitched their tents on the banks of Kasai River at a place named Kasafal. The second halt Dogara was around 22 km from Kasafal. At Dogara the tents were pitched on a highland covered with Casuarina trees. They reached Talsari on the third day after crossing the Subarnarekha River and trekking for nearly 23 km. From Talsari they reached Digha on motorised van-rickshaws," said Biswajit Ghosh, principal of the academy.

Ghosh pointed out that a normal youth won't feel the pain and tiredness while walking for 20 km on the beach as he would divert his mind by seeing the beauty of the sea and other things. But a blind boy who can't see anything would feel the tiredness as he has to concentrate on the trek alone.

"Despite all these difficulties and their challenges they did it," he added.

Each and every one had a responsibility on the trip. While those who were totally blind were given jobs such as washing vegetable, taking off the shells of boiled eggs and peeling boiled potatoes, those who could partially see were asked to fetch water and light a stove. Food was simple with rice, dal, egg curry for dinner and either chapatti or toast for breakfast.

"But it was a real thrill. We learnt how to pitch tents, slept on polythene sheets, eat freshly prepared self-cooked food. We collected shells from the beach and brought them back as mementoes. None of us complained of any difficulties and none fell sick. We enjoyed it to the hilt," said Tahasimul Rine, student class XI who has lost vision in both eyes.

On the way the students learnt a lot about life on the beach. They interacted with fishermen, saw how the fisher folk wove fishing nets, came to know many new things about tides, learnt about trees found on the coasts such as Casuarinas and marine animals among others.

"Through this costal trek they could judge their capacity and develop self confidence. They learnt about team work and how to care for each other when out of their comfort zone. Above all they learnt how to keep on going when things get tough because walking for 62 km on sand is not at all an easy task," said Chandan Majumder, placement officer of the academy who escorted the students on the trip.


The Award Programme Foundation and
the National Award Authority of the International Award for Young People
wishes all Participants, Award Holders, Award Leaders,
Volunteers, and Partners a very

May this New Year be a step forward in leading you to new adventures,
new roads to explore and success to attain.
Posted by The International Award for Young People at 1/01/2016 10:48:00 am No comments: