Not often does one get to experience the pristine beauty of nature closely. However, we were fortunate to have experienced it for five days as a part of our Gold -- All India Residential Camp. On the 27th of December, a group of thirty students, two from GD Goenka World School, Gurgaon; six from the University of Delhi, and twenty-two from Coorg Public School, Gonikoppal started our residential project in Coorg, Karnataka. We were backed by a very dedicated and competent staff from the Coorg Public School, led by Mrs. Teena Machaiah (Award Leader). 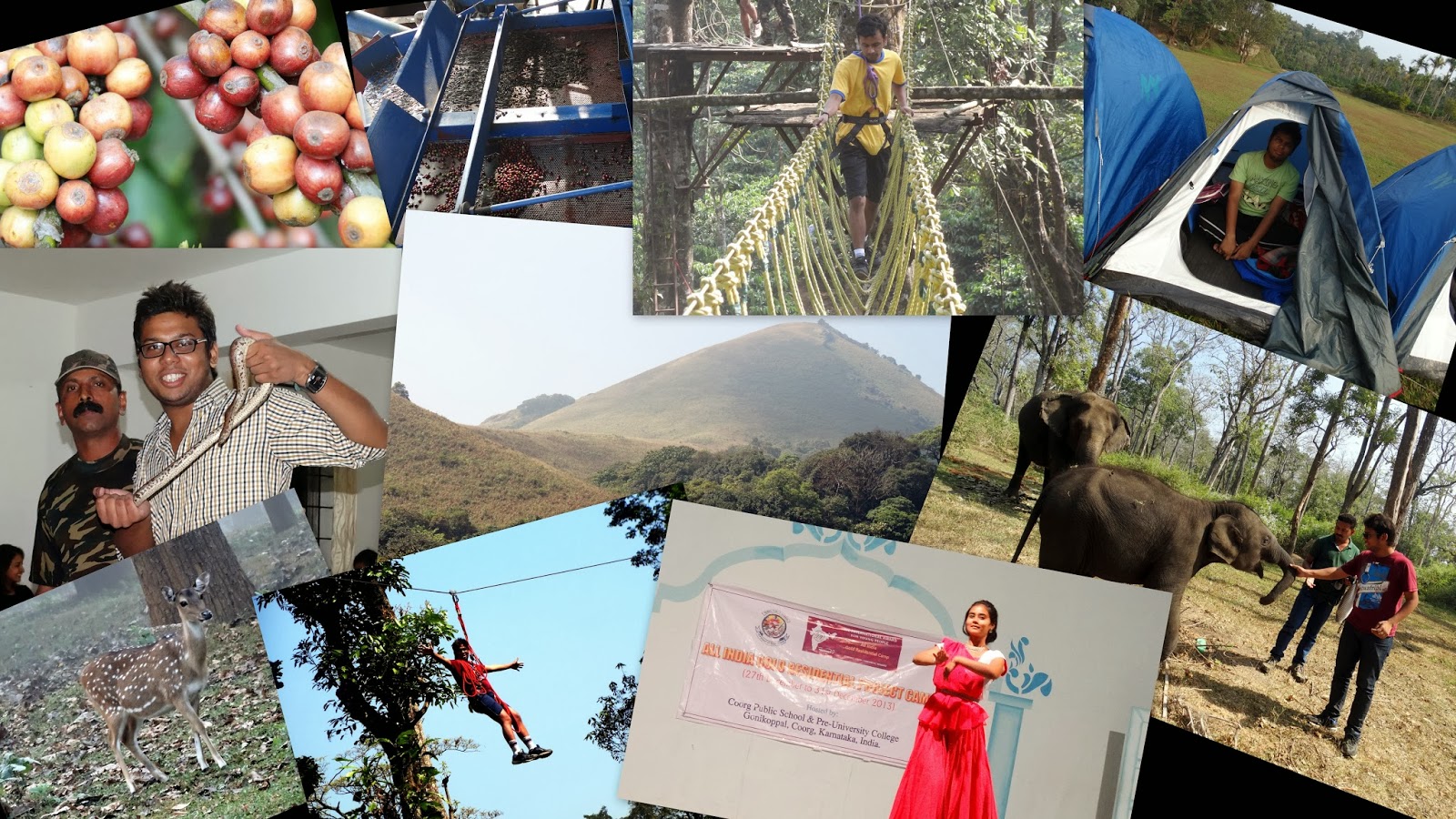 Day one began with the orientation at the school itself, followed by a motivational speech by its Director Prof. M. D. Nanjunda. We then headed to a coffee estate owned by Tata Coffee Limited to enhance our knowledge of this popular beverage. The estate is the largest Arabica plantation in Coorg district. The elevation is in the vicinity of 3000 ft. above mean sea level. The annual production of Arabica ranges from 400-600 tonnes, complemented by about 100 tonnes of Robusta coffee, predominantly of the superior Congensis type, as told to us by the manager there. We saw how the coffees are selectively handpicked at the right stage and then undergo processing in the traditional way involving fermentation, aqua washing and sun drying. Maximum attention is paid during the post harvest operations to preserve the inherent quality. After having talked to workers of the lowest stratum, we realised the estate places considerable emphasis on the social upliftment of its work force. This aspect, along with its good agricultural practices, is evaluated periodically by external agencies.

The second half of the day had another unique venture awaiting us. Mr. Satish, a well-known snake wrangler of Karnataka, organised a session for the campers on the Big Four venomous snakes of India namely, Indian Cobra, King Cobra, Russel's Viper and Saw Scaled Viper. We not only got to study them closely but learnt about the common myths associated with them. This session took away all the fear from our minds, and helped prepare us for the following days to be spent in the jungle.

On day two we left the school at the crack of dawn for Nagarhole National Park, Kodagu. We were guided by Mr. K.M Chinappa, a retired ranger from the same forest. He helped us connect with the Nagarhole Wildlife Conservation Education Project under which we learnt the local flora and fauna methodically. It was a moist deciduous forest with rosewood, teak, sandalwood and silver oak being the predominant tress. Forests are watersheds, and have economic, environmental and climate control benefits. We examined its critically changing behaviour which is adversely affecting the human population. We also experienced how poaching, timber smuggling, forest fires and human encroachment are aggravating the situation. In the evening we had an enlightening session on Human Wildlife Conflicts by Mr. Ballera Chengappa. Human-wildlife conflict refers to the interaction between wild animals and people and the resultant negative impact on people or their resources, or wild animals or their habitat. Human-wildlife and other conservation-related conflicts are serious obstacles to wildlife conservation efforts worldwide. The conflict is often as much a conflict between people about the wildlife, as it is a conflict between people and wildlife. Such conflicts are becoming more prevalent as human populations increase and diversify, development expands, resources shrink, the global climate changes, and other human, societal and environmental factors put people into greater potential for conflict with wildlife. We also discussed about the role of micro species in maintaining the ecological balance highlighting the projects run by the government.

The third day we left our camps early in the morning to traverse through Brahmagiri hill, led by Mr. Bose. It is situated on the border between Kodagu district in Karnataka state in the north and Wayanad district of Kerala state in the south. Brahmagiri Hill, 1608 m high, is well forested and has a lot of wildlife. The area has mainly evergreen and semi-evergreen forest, and in the higher altitudes, there are grasslands with forest patches. Bamboos are well represented in these forests. The group started to trek early in the morning from the Irupu waterfall. Well, we skipped the visit to waterfall and started the trek right-away. We were already well versed with the do's and don'ts needed to be followed once inside the forest. The initial trail was a little steep and covered with fallen leaves, making it pretty slippery. Later it became much easier to walk. After a while, covered under the forest, the trail opened up to some magnificent views of the Western Ghats. On our way, we understood how the tigers establish their territories and came across the trails of elephants. We came across several water streams which makeup the Laxmantirtha River. After the water stream, the trail again opened up and we entered a land of breathtaking natural beauty. The trail further passed through a dilapidated and abandoned watch tower. We later went to the Nagarhole rest house which had been devastated by the elephants. On our way back we visited the Irupu waterfalls. That night we spent in the tents set up for us in the open.

Sports and physical education are necessary components of human development, good health, and companionship and to have a spirit of friendly competition. This has a positive impact on the overall development of the personality. Brilliance in sports enhances a person's sense of achievement. Day four was the day of outdoor recreation which encompassed a few adventurous activities like Rope walking, Paddle walking, Zipping. True adventure lovers look for the opportunity to challenge themselves and learn from their experiences and we were no different. These activities were leisure pursuits in the natural settings away from the town in which we all were engaged with our individual efforts to win over the fear of crossing the ropes from one tree to the other at a considerable height. It proved to be a group effort when the new friends of Coorg Public School were around to cheer us while performing such risk-taking skills. Beneficial use was related to the physical and social rewards. It helped us to practice enhancing and challenging skills and test our stamina and endurance.

On our fifth and the last day, we left our tents in the morning and started travelling back to our base camp at Coorg Public School. On our way back we crossed several tea estates and visited our last destination, the Thithimathi Mathigodu Elephant Camp. The camp had seventeen elephants which included eleven adults, three calves and three wild ones in captivity. We studied the elephant anatomy, diseases, care, training and breeding. It was intriguing to talk to the Mahouts who train the elephants and learn about the silent yet beautiful relationship of these majestic animals and men. The campers and the team leaders reached the base camp at midday and we had lunch together, accompanied by the principal of the school and the director. In the evening, the students of the school and we gathered around for a cultural night. This event was a cherry on the cake and gave a perfect ending to our residential project. We shared our experience and witnessed several performances by the school students and the campers.

Like every good thing has an end, this camp ended too but with conviction we can say that we have gained an experience of a lifetime and what we have learnt will help us strive to become better individuals.
Posted by The International Award for Young People at 1/08/2014 10:30:00 pm