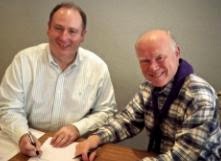 The Duke of Edinburgh's International Award and the World Organization of the Scout Movement, longstanding partners, have issued a joint statement aimed at strengthening their relationship across the world.


In the statement, which is being issued to all National Award Operators and National Scout Organisations, the two organisations affirm their ‘complementary values and goals’ and the achievements which both have seen in recent years through ‘strengthening links at national level’.
As the Award is a global framework for non-formal education, it is open to any young person aged 14-24, including Scouts. Many Award participants become involved through their membership in Scouts. For Scouts, doing the Award gives added value: while many Scouting activities will count towards Sections of the Award, Scouts are also encouraged to engage in activities that they otherwise might not have done. The Scouts also get the additional recognition of the Award, a globally recognised and valued non-formal educational qualification.

Doubling the recognition for young people

Common activities such as voluntary service and outdoor activities that are part of regular Scout activity and those activities done to achieve The Duke of Edinburgh's International Award can be counted in both organisations although done once. As a result, young people can double the recognition they get for their activities.
The statement emphasises the huge benefits for both organisations in working more closely together. In some countries where they have developed joint initiatives there have been dramatic increases in the number of participants doing the Award through Scouts, and Scouting has seen a dramatic increase in numbers in the 14-24 years age range.
John May, Secretary General for The Duke of Edinburgh’s International Award, comments “I am delighted that The Duke of Edinburgh's International Award and the World Organization of the Scout Movement are continuing to strengthen what is already a close and fruitful relationship.  In some countries where the two organisations have developed joint initiatives, we have seen dramatic increases in the number of participants doing the Award through their membership of the Scout Movement.   This can only be of benefit to the young people involved and, ultimately, to the communities in which those young people live.  As a lifelong Scout myself, I appreciate the terrific opportunities that Scouting can give to young people.  Engagement in the Award provides  those young people with international recognition of their achievement - a real win-win situation for everyone involved.”
Source: http://www.intaward.org/news/award-and-scouting-joint-statement-strengthens-global-relationship
Posted by The International Award for Young People at 4/16/2014 03:10:00 pm