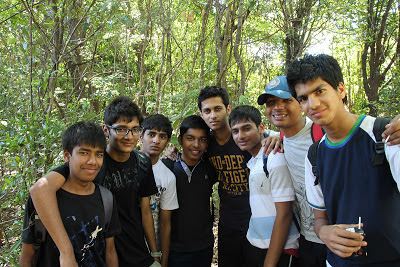 Kudremukh is located in Karnataka and it is approximately 10 hours by road from our school, Sarala Birla Academy. The trip lasted for four days from 15th to 19th January. Our journey began early morning on the 15th of January via bus.  We reached our destination by late evening and we were then briefed about our itinerary for the next 4 days. Our stay was planned in a guesthouse of a person living in that locality. The land was around 60 acres in size and had various facilities like a number of rooms, a volleyball court and a huge area where tents could be pitched. There were two Swiss tents also, to accommodate seven people each. The main attraction was a small river-cum-lake, which acted as an amazing rejuvenating place for the students after the tiring treks. The 1st night in Kudremukh was full of jokes and discussions - and our adrenal rush began with the lighting of the campfire.

The second day had a lot in store for us. Our day began with a 6 o'clock rouse, followed by breakfast at 7 am. The treks began at 8 am and this was indeed a lifetime experience. We were told that water would be our best friend during the treks and this suggestion was true. People with extra water shared their asset with the rest of the grade mates - and we learnt the importance of resource management! At around 5:30 pm we returned to our base, quite tired. Then we freshened up, had our evening tea and played some volleyball matches till dinner. After we were briefed about the next day's programme, we ate a hearty dinner and then called it a day.

On the third day, the 60 students were divided into two groups of 30 students each. One group headed for the waterfalls while the other group had various team building activities. The group that went to the Soothanabbi waterfalls had an amazing time in the chilled water for two hours. Then they had their lunch by the waterfalls and finally went to a sunset point to click photographs. The second group participated in a number of activities like river crossing, high rope activities, team building activities like magic turtle, filling the bottle with a sponge, ball between two people and volleyball.

On the fourth day, the two groups switched their activities and thus all the students got to enjoy both the waterfalls and the team building activities. We also spoke to the elders of the host family that night, as it was our last night with them. We were given a warm invitation to visit again whenever we wanted.

Next morning, after thanking the host family, we boarded the buses back to school at 9 am. We reached school with loads of stories and fun-filled memories.  To sum it up, the trip was full of adventure, thrill and excitement. United we stay and divided we fall - that is how this trek had functioned throughout. My ability to meet challenges was tested and I progressed in various new roles. I would like to thank Mr. K.S. Biradar, Mr. John Das, Mr. Rajat Sabarwal, Mr. Jagdish Joshi, Mr. Upadhaya and Mr. Subrojeet and last but not the least Mr. Karthik and Mr. Sudip Mukherjee for organizing this trip. Click for more photos