Report on T4T at Dhaka

Held from 5-7 October 2012 at Dhaka, the T4T was moderated by Rob Oliphant, Regional Programme Manager, Asia Pacific Office and was held at Heritage Restaurant, Dhaka. I was honoured to be the only foreign participant at the workshop.

The workshop primarily focused on promoting IAYP which is still called the Duke of Edinburgh's award (DEA) in Bangladesh and focused on a two-point agenda. Firstly, presenting The Award to different groups and secondly forming links with other organisations which follow a format very similar to the IAYP like BNNC, Scouts and Guides, Red Cross (called Red Crescent in Bangladesh), Universities Corporate organisations like banks and other multinationals.

In order to do any of the above effectively, we were instructed about our role and responsibilities as future Trainers and were taught the essentials of giving a good presentation through NAOME and TRAM CARS. We also learnt about different learning styles and what makes the current generation tick before we were put into groups and asked to present the different sections of the Award to different segments of society. The feedback which we got from Rob was very useful as was the feedback from other participants. All in all, this workshop was a fantastic training ground for me and it was wonderful to get an insight into how the award runs in another country. 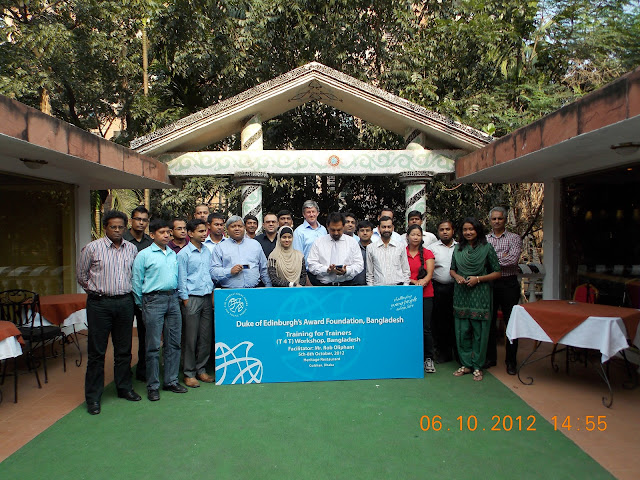