It was a warm sunny afternoon on the 13th of January, 2012 when we visited The Moran Blind School where we, the students of The Assam Valley School – Archit Harlalka and myself,  helped organize a free eye check-up camp for the students under the guidance and supervision of the Chairman of the Lion K. K. Saharia Eye Hospital. 25 resident students benefited from this camp.

This camp had been conducted by Dr. Arundhati Tamuli, the chief medical officer at the Lion K. K. Saharia Eye Hospital. She was accompanied by two of the hospital staff who had volunteered for the camp as well. Necessary medicines were distributed amongst the children. 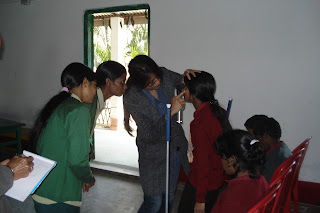 We got the privilege of interacting with the pupils there and they were very warm and welcoming. It would not be an over-statement if I said that we felt at home within just a few minutes of stepping into the school. Amidst a casual conversation with the children there, some of them even sang for us and it was amazing to see them all so happy and bubbly. It was an indescribable feeling when we could finally bring a cheerful smile on those innocent little faces.

Tucked away in the green exuberance of the North –East, the Moran Blind School owned by Mr. Victor Banerjee and run by Principal, Mr. Buragohain, has a spectrum of dedicated staff who look after the all-round development of the children. The teachers, all well-versed in Braille, not only look after the children academically but also provide them with co-curricular activities so that they can be independent when they have to face the world. One such success story of the Moran Blind School has been immortalised in the documentary made by some children of our School in the early wake of November 2011 under the tutelage of Devraj Baruah and Kapish Karnani – “The Unseen Song” (provide link) . It tells the story of a boy who graduated from this school and is now not only doing academically well but is also practising tabla and thus living a content life. Though life was quite difficult for him, yet he remained undeterred and rose from the ashes and has established himself in the realm of life. This documentary truly sparked the fire in our bellies to lend a helping hand in every little way we could to help the children of the Moran Blind School. 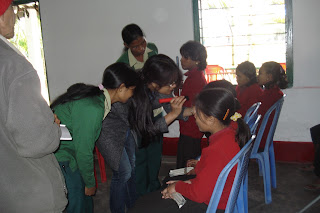 This camp was a learning experience for both of us in many ways. It taught us the virtue of service and helped us to see beyond our own needs and requirements. It made us realise how we can always be happy and content with what we have, if only we stopped and thought about what we really have and how lucky we are to have all of it!  But, above all, the children of the Moran Blind School have taught us humility and how even the mundane things in life can be worth living for if only we have the courage and the will to persevere as life eventually unfolds new challenges at every turn. That day, we walked out of the school not only satisfied at having been a part of something that helped somebody else but also grateful that we had the chance to learn from them as they showed us how to see what lies beyond and that which is most important – humility and humanity.

At this juncture, where we stand as the “graduating” students, we often look back on those precious moments spent there and we cannot wait to get back to the students of the Moran Blind School and be in their warm company once again; to once again have that privilege to be a part of the experience that these brave students have as they take on one challenge at a time and make life a joyful experience as it is meant to be.