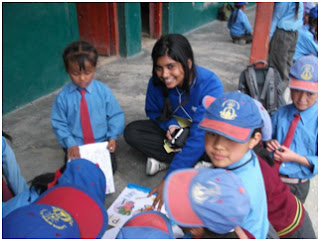 The long awaited day had finally come to an end with my departure from school on 7th July 2012 to RSIS Ladakh. I met all the other participants from all the corners of the world in Delhi and also our leader Mr. Matt Hall.

We reached Leh in 9th July and stayed in the hotel Ladakh Residency for 3 days. During our stay we visited Shanti Stupa, a magnificent white stupa with Buddha’s images on it, the next day we took a 2 hrs drive to Alchi Monastery which is 11000 years old and the last was the shopping day. On 12th we left our luxurious hotel and headed towards Thiksay, a small town in Leh. As soon as we reached Thiksay we visited The Lamdon School, Thiksay. Place where we were going to work.  We were welcomed warmly by the school staff. After the school we took the path which took us to our campsite.  We had a beautiful campsite which was next to the river. It included 7 tents, 1 common area and a dining area. The most challenging task was to use toilets and bathroom but later on we became used to it. For bathing we had to go the river which was beautiful experience. Every day we used to have 3 work session of 2 hrs each. After the 3rd work session it used to be our bathing time and then at 7:00 pm it used to be our dinner time. We were divided in 4 groups. Each group used to have a domestic day where instead of going to work site they used to clean the campsite including toilets, then they used to go to the school where they used to teach students and do creative activities.  Every day we used to play some games organized by the domestic group.

At the worksite we used to make piles of bricks, put mud, we also made a huge wall by putting huge granite rocks; we used to go to the brick factory where we used to load the bricks in the tractor. Besides this we also got the opportunity to see the great Dalai Lama. We also visited Pangong Lake, which is a beautiful lake. On our way to Pangong we visited world’s 3rd highest restaurant and also had a bowl of Maggie. We visited Monasteries, Praying Flags and even Indus River. Soon our building started taking up shapes, and we realized it was time to say goodbye to kids and to Thiksay.
On 26th we took a drive to Shang from where we started our trek to Shanh Po, we crossed rivers and reached our campsite situated at the height of 4350m above sea level. We had our cook team with us which used to cook best food! Next day we continued our trek to shangla. It was the toughest day, we walked for 8hrs and reached mathu phu situated at the height of 4500m.

Day 3 we continued walking westwards towards mathola, we reached our campsite which was next to the river and got the opportunity to bathe in it, it was quite an experience as the water was of melted glacier! We left for mankarmo to rumbach which is at the height of 4000m. On that we had to walk for 8hrs we soon reached our campsite and spent our last night by sleeping under the stars. Next day we walked down the hill and soon we saw our transport waiting for us. It was mixed feelings as we were happy that we successfully completed our trek and also sad that soon we were going  to leave.
We reached our hotel and spent the rest of the bathing and writing about our secret buddies. The next day our very last day we did shopping and in the night we had an award ceremony where we were given badges and titles. We thanked our guide Chitha and our cook team for their all time support and delicious food.

One of the most important things which I have gained is friends. After spending almost half a month, now we are completely attached to each other, there is a special bond that we share.  We share those memories, which we are going to cherish our whole life.

There has been a change in me as now I am more confident, full of courage and more independent person with lot of dreams and wishes to fulfill.

I would like to thank our Principal Ku. Sumer Singh, Vice Principal Mr. Rajan Potty and Ms. Sarita Badhwar for believing in me and giving me this opportunity, and letting me see the other side of the world.