When the going get tough the tough get going

July 6 to the 9th  of July was a day of reckoning for all the aspiring awardees of Emmanuel Ministries Calcutta, Since the inception of the award programme at Emmanuel Ministries in 2001, we have witnessed 12 young adults who have successfully completed the Gold standard and have taken a prominent stand in their community. Sixteen boys and fourteen girls from two projects of Emmanuel Ministries, namely the Pavement Club and the New Market community development project with the Harijan or the Dalit class comprising of municipal sweepers, local fruit vendors and basket weaver were eligible for the expedition to Panchilingeshwar. In order to complete the criteria required for all three section.

The excitement began very much prior to the date of departure. Many of them had heard about trains and yet had not been on one , so this was a dream come true. Some of them heard horrible stories of train accidents which remained as a nightmare to them. Yet nothing could rob them of the excitement of travelling together as a group on a crowded packed train It was a big leap of faith! 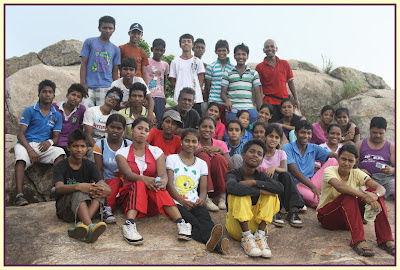 We all assembled at the Emmanuel Ministries premises and bid farewell to the parents as we headed towards the Howrah Station to board the Dueli Express that departed at 6:10 am. As the train signaled it way down the track, the students burst out into laughter and merry making. They sang bollywood tunes, played memory games and even shared refreshments together.

On reaching the campsite the students were captivated by the natural surroundings. As quoted by Sangeeta Ram – although I am miles away from home, yet I do not feel home sick as I am surrounded with such lovely people who cares for us and make us feel at home- it is a home away from home.

Our first practice session was on the boulders and I said this to myself says Md. Akbar “ Oh its easy stuff” later on I was amazed that there was so much important instruction that needed to be followed. The evening session on the mountain manners was very encapsulating as it made us more aware of our environment and the importance of people in our lives.

Our 2nd day trek to the Nilgiri mountains at a height of 2,500 ft was an exhilarating experience. Many of the awardees experienced the adrenaline rush as they scaled the rock surface. Rakhi Mullick, a bronze awardees, almost gave up at one point. She persevered and pressed on till she was on the summit. She stated “Today I have learnt not to give up but to keep pressing on.”

A Rope Knots session intrigued almost all the students. There was a lot of interest developed to know more about it. Easy to tie and easy to open was the key to this session. Md Zeeshan mastered the technique and continues to practice these knots even at home. Rappelling down the mountains was what everybody sought after. Practically everybody wanted to have a second go with it, but due to lack of time it wasn’t possible.

On third day the students trekked to the nearly villages for almost an hour and half. Aarti a gold awardee was moved by the plight and the condition they lived in. She discovered that she although coming from a poor family was far better well off than them. She also witnessed great joy which lit up on their faces on seeing the group. Most important equipment was the rope or the life line on which every student depended upon. Other mountaineering classes like Tent pitching, Jummering and mountain sickness was of valuable importance.

Md Manzoor a gold awardee describes camping expedition not in terms of achievement but in terms of what I have become as result of it. He personally feels that these camps are all about exploring into all possibilities and discovering more about yourself in an unfamiliar terrain. According to him camping is fun and adventurous only when the value imparted to us are practiced.

Gold award holders Rohit Mallick and Jyoti mallick volunteered to accompany the awardees on their expedition. Rohit explains that the award programme is not about competing with others but competing with self. After being felicitated the gold standard at the prestigious presidential award ceremony hosted in the capital. These four gold award holders namely Rohit Mallick, Jyoti Mallick, Rupa Mallick and Rekha Mallick took up the challenge of promoting the award to 12 youngsters in their community under the leadership of the Award leader Mrs. Suchandra Roy Chowdhury and the response was phenomenal.