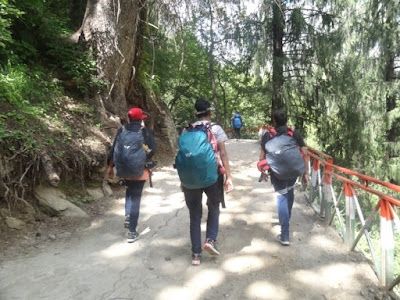 A group consisting of 15 Bronze aspirants from senior school with two mentors and a professional mountaineer as guide left for a trek to the Valley of Flower on Sept 11, 2016. The Valley of Flowers constitutes the second Core Zone of the Nanda Devi Biosphere Reserve (NDBR).

Along with additional morning and evening workout, which was indispensable to keep the boys fit to take up the trek of 60 km (to and fro from the road head) at Himalayan heights (up to 13,500 ft.) and acquainting them with the vagaries of weather therein, they were made conversant with all that was knowable so that the trip may ultimately culminate into a memorable learning experience. The participants were familiarised with the background information of the area before taking up the trek.

The International coordination council of UNESCO in its first meeting in 1971 had first floated the idea of the creation of Biosphere Reserves throughout the world and so far, more than 400 Biospheres Reserves in 90 countries have been created. Out of the 18 Biosphere Reserves created in India, the Nandadevi Biosphere Reserve, named after the famous Nanda Devi Peak, enjoys a distinct place. It is the second oldest Biosphere Reserve of India, created in 1988 (after Nilgiri, created in 1986) and the first one of the Himalayas. This reserve, spread over an area of 2236.74 sq. km, occupies a special place in the Biosphere Reserve systems of high altitude Himalayan region of India. Its territory comprises the unique combination of meadows, several high peaks and glaciers. On February 7, 2000, Govt. of India extended the total area of NDBR from the then existing 2236.74 sq. km. to 5860.69 sq. km. by including the Valley of Flowers National Park as the second core zone and adjoining habitation zones as the buffer zone. Before 2000, there were only 17 villages in the buffer zone of NDBR. 30 more villages including the famous Badrinath shrine and Hemkund Sahib have been incorporated in the buffer zone area during the expansion of the protected area. Thus a total of 47 villages are now situated in the buffer zone of NDBR in the districts of Pithoragarh, Bageshwar, Chamoli etc of Uttarakhand Himalayas. Four of these villages are presently uninhabited.

A 17 km trek connects the Joshimath-Badrinath road, some 250 km away from Nainital with this second core zone of Nanda Devi Biosphere Reserve. Ice rarely melts here, save in the rainy season. The region where this second core zone is located is called the Bhyundar Valley. It was Frank S Smythe, an English mountaineer, who first discovered it in 1931. He spontaneously named it as ‘The Valley of Flowers’. In 1939 the Botanical Garden of Edinburgh sent Miss Joan Margrett Legge here for collecting the seeds of some rare varieties. She lost her life in this valley in a fatal fall from a rock on 4 July 1939 and is buried at the spot of her fall in the valley. Well before her death Frank S Smythe in his book had described this landscape as "a valley of perfect beauty where the human spirit may find repose”. The words engraved on the grave of Joan Margrett --I will lift up my eyes unto the hills from where cometh my help -- speak of the ultimate solace the human heart has always found in such towering heights melting into the endless blue.

Situated in the upper expansions of Bhyundar Ganga, a tributary of Alaknanda, the valley of flowers has seen some important changes in the past few years. Grazing of cattle is completely banned here now. One cannot take away plants or their bulbs from here. In an active liaison with the department of forests the local youth here have been a grand success in keeping the region ever so clean despite the mounting pressure of tourists and pilgrims who pass touching the base of this valley while on way to Hemkund Sahib, six km ahead.

On Sept 11, the group left Nainital in the wee hours of the morning in two vehicles. It had been drizzling since the night and the entire landscape was enveloped in mist. The group was flagged off by the Principal at 6.30 am. The destination as per the itinerary was Joshimath, a border town, over 250 km away from the point of departure. Situated in Chamoli district of Garhwal Hills it is known as the base camp for those on the way to Badrinath.

Passing through the deep gorges crisscrossed by gurgling seasonal streams due to continual drizzling and gaining height while climbing the successive expanse of central Himalayan summits, the group having crossed the historical settlement of Dwarahat by early noon struck the most fertile tabled expanse of Givan valley. A meandering climb from this valley finally terminates at a vantage point known as Dewalikhal. Driving past the holy town of Karnprayag, known for the confluence of Alaknanda and Pindar rivers, the next stoppage was at Pipalkoti. By nightfall, the group arrived at Joshimath. 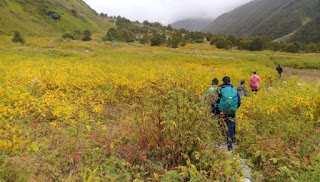 The next morning while the Nandadevi summit with all its feminine grace was shining in the rising sun and the faint glimmer of the distant 'Sleeping Beauty', yet another peak, could be seen through the window panes of the cozy dining hall -- the group, following an early breakfasting, drove towards Govindghat on Badrinath road.

A lively settlement once on the banks of turbulent Alaknanda, past Vishnughad - Govindghat is around 25 km away from Joshimath. It is from here that the 17 km long trek to Ghangharia, the base camp for the twin destinations, while traversing the rugged terrain along the Bhyundar Ganga- a tributary of Alaknanda- was to gain the height of 4500 ft within next five or six hours. This distance of 17 km was to be negotiated well before sundown. Here the group was divided into two halves and munching the tuck and later the packed lunch, the journey begun by 10 am after a briefing by the guide at the take-off point.

The entire expanse between Gobindghat and Ghangharia along the Bhyundar Ganga is thickly wooded with Spruce, Birch and Blue Fir. Foamy cascades nestling on towering rocky heights  guarding the entire valley like sentinels, add on to the picturesque charms as one walks the cobbled pathway that stretches right up to Ghangharia.

The advance party reached Ghangharia early in the evening followed by the arrival of the rest by sundown. Ghangharia at an altitude of 11500 ft. indeed is like a sudden outburst of visual urbanity after traversing 17 km of thickly wooded trek. Beyond it is the unending wilderness of the Valley of Flowers enlivened by the splash of colours, rustle of wind stealing its way through the age old conifers and the reverberation of hill streams.

Next morning the group set off for a seven km march to the Valley negotiating a steep climb through a meandering goat's trail overlooking deep gorges. The Valley of Flowers actually is an alpine meadow at the foot of Mt Kamet. At the Himalayan heights, the weather generally remains unpredictable and one often encounters routine showers in the afternoon. The group went deep right up to the moraine in the valley that has an expansion of around 9 sq. km. Besides the Azalea bushes, Primulas, Fritillaria and so many other flowering and medicinal plants the landscape itself was found to be quite enchanting. Intermittent rains, for which the group was already prepared, could not deter either the curiosity or the enthusiasm of the members of the group and by the evening they arrived at the base camp.

On Sept 14, as the group was preparing for the return journey it snowed in the valley and the Twin Mountains marking the entrance to the valley became flaky white. On the way, the far off Hathi Parvat was also clad in snow. At 2 am on Sept 15, the group was back home at Nainital.

For all the group members it was indeed an opportunity not only to communicate with nature but also with the people who have been inhabiting it over the generations as its true custodians. It will not be out of place to mention here that as a product of people-policy conflict the Chipko movement in the seventies originated from this region only. It was also an opportunity to realise, and that too for the first time, that despite the apparent and alleged 'madness' with which the forces of nature are often dubbed, there is a 'method' in it; designed of course to protect and nurture those who love and care for it.  Click here for more pictures...