A report from Divisha Jaiswal and Vedika Karnani from Modern High School for Girls, Kolkata 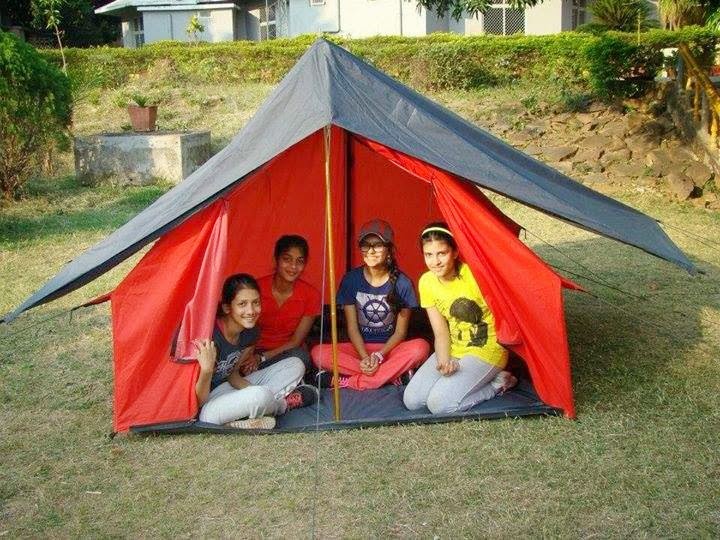 It was with much enthusiasm and spirit that Modern High School for Girls IAYP unit set out for the Panchalingeshwar Camp in the afternoon of 19th January, 2015. There were 65 participants in all, divided in two spacious buses, with four Award Leaders and six Field Officers of IAYP.  For most of us, this was our first I.A.Y.P trip. It was thus not very surprising that the excitement levels in the bus bordered on mild chaos.

After a 7 hour long bus journey which nearly convinced us that the journey did NOT in fact matter more than the destination, we arrived at our lodging; an inn called Panthasala.  After snacks was a session with Chandan Sir, the IAYP Programme Manager.

The next morning was the official beginning to our trip. At 6:15 a.m., we headed out for a round of jogging and exercise. Later, we were divided into our rope-line groups in which we would do all our activities. After a (very) hearty breakfast, we headed out to begin our activities- linear traversing, rappelling, tent pitching and rock climbing, with the Award Leaders actively participating in each exciting (scary) activity.  Ropes 1 and 2 also trekked to Khemkut dam (3.5 km away) after lunch, while the remaining ropes did self-cooking to provide the snacks for when we returned. The dam was a sight to behold, what with a submerged temple and hunting tower, built in the age of the Nanda rulers. After returning, we had some time to rest and another session with Chandan Sir. While discussing the day's events, he told us that this day was not only about what we did, but it was about what we learnt. That was the primary objective- to learn, and not just do. Suffice to say, at the end of the day, we weren't just tired, we were on the verge of perpetual collapse.

The third day began much like the second, only with many aching muscles and joints to add to the glorious morning. After breakfast, we headed out for the remaining activities, along with single lined bridge, Burma Bridge, knot class and the spider web. We learnt important things that would help us in the future, for situations which we might unexpectedly encounter. After snacks we got ready for Camp Night, which even in the absence of a campfire, was no less enchanting. We all sang, danced and enjoyed ourselves thoroughly. Courtesy of soft drinks. Ahem.

The next and final morning of our short trip, we trekked 8 kilometres to see the Panchalingeshwar temple. After a total of 311 steps and a walk through the forest, we finally reached our destination. But this time, the journey was indeed what mattered more, and what we shall carry with us. Along the way, we learnt the precautions and the important things we must know when we enter a forest. After a quick breakfast at the temple we headed back to camp to pack and leave for Kolkata.

We left Panchalingeshwar with memories and valuable lessons that would stay with us for a life time and a half.  Be it jumping off a small cliff, praying to all gods in existence, or climbing rocks like mountain goats, or starting a fire by burning a foot long leaf to cook pasta.  Be it sharing a room with (lazy) friends or sessions with Chandan sir. We learnt to be independent, self- sufficient, to conquer our fears and be stronger. Here we discovered a side of us we didn't know existed, stretched our limits, exceeded them and set new ones, only to break them later. We truly rediscovered ourselves on this journey.

Thanks to all the Field Officers and Award Leaders who accompanied us, this became the most fulfilling time of our lives. We were in it for the fun, but what we got back was so much more. Thus, it was with hearts heavier than our hearty breakfasts, that we boarded our buses to leave for Kolkata, with the echo of the mountains still ringing clear in our hearts.

Oh, and most importantly, we found the answer to a very difficult question; a question which has been a favourite of every teacher in existence. The question being - "So if your friend jumps off a cliff, will you also jump off a cliff?”

The answer after this Camp my friends, is yes. For we evidently did.